Accuracy is not precision

Accuracy is not precision

Accuracy is evaluated by taking the average of a set of numbers and comparing it to the standard. But keep in mind that accuracy is not precision.

Defined as the difference between the average number of observed values and the accepted standard, accuracy is something that all #manufacturers strive for in their output, but oftentimes confuse it with precision.

To visualize accuracy, imagine a game of golf. A player takes four shots. The first goes an inch beyond the hole. The second and third go an inch on either side, and the fourth and final shot goes an inch short of the target. Measuring the average of each of these shots, in a similar way to how we measure accuracy, would put the ball right down the hole, but we know that’s not the case. The player was accurate, but not precise.

Now, imagine that same game of golf, and the player hits those same four balls. This time they all land an inch short of the hole. They don’t get the hole-in-one they were hoping for, so some slight adjustment is needed for perfection, but their shots all landing exactly in the same spot shows that they are very precise.

When choosing a tool to apply #coating to your products, which would you rather have: a precise read-out that just needs minor adjustment for perfection or an average that could spell false calculations? The answer should be clear.

Using technology to measure and determine the exact results in your operations, including giving a read-out of any problems in your process, gives you and your team a huge advantage in understanding how to approach solving problems. One such technology is SprayVision. Combining compact hardware small enough to sit in your #spray booth, with software that’s intuitive and lightning fast, you can measure accuracy data points in seconds, and adjust for precision in minutes. 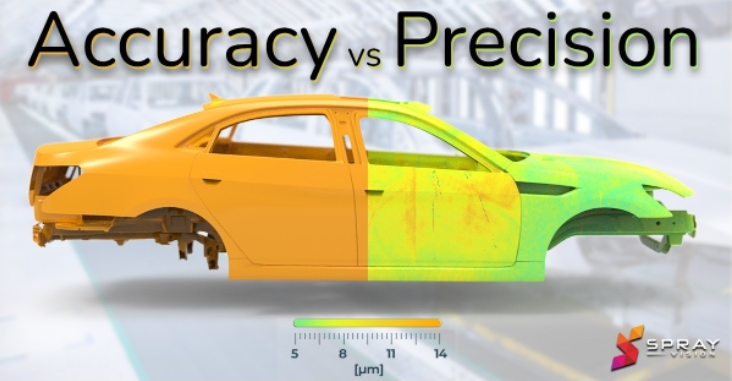